“Nothing is perfect.” That is a common phrase used for something that is accepted despite its flaws. San Francisco is my favorite city in the world, which is obviously a major reason I live here, and I will link this post to my list of favorite things about the city when I eventually get around to finishing it. But even my favorite place has its drawbacks, so I listed five of them below.

Ironically, the bubble is one of the reasons I’m lucky to live here. By “bubble,” I’m referring to entering and exiting town, and I empathize with those commuting into the city daily for work. When I began working in San Francisco a year ago my commute from Sacramento was three hours each way before I saved enough to relocate to San Francisco. In fact, I recall forking over north of $1,000 per month for my commute.

The mostly aggravating options to get into town include: the often overcrowded and emergency delayed BART, sometimes agonizingly slow Caltrain, even slower ferries, and freeways that turn into parking lots during commute hours. This is without even mentioning the pre-commute; on days I didn’t ride Amtrak into the Bay Area from Sac my only other option was to drive down the I-80 corridor, which is fine until Pinole when the sea of cars in front of you slows to about five miles per hour.

Combine a dense population with a large homeless population and you get a city that has trouble keeping up with waste, particularly in the Tenderloin and the stretch of Mission Street between the two Mission District BART stations. The strong odors of urine and bird feces are staples in certain parts of town. The city also has its fair share of cigarette smokers, which are tolerable when they’re not walking directly in front of you or lighting it up in their units. This particular rant is inspired by the mystery smoker in my building. Imagine your place suddenly filled with the smell of cigarette smoke because someone in another unit didn’t want to light it up outside! I know...this is not exactly a “San Francisco” problem.

I will give credit to those who walk like they have places to get to. But this is an aesthetically pleasing city resting on the coast of a state known for its laid back populace, so it's no surprise that slow-moving groups of people sprawl out and extend the entire width of the sidewalk so I must go into the street to pass. That group of four could easily travel in a two-by-two box, which would allow both oncoming foot traffic as well as faster rearview traffic to pass.

Speaking of passing slow traffic, recall your trips between NorCal and SoCal on the two-lane stretches of I-5. The majority of big rigs keep to the right lane allowing faster traffic to pass to the left, so you switch to the left lane to eventually pass the line of big rigs, but just as you make the lane switch the big rig directly in front of you also decides to switch. So now you are stuck behind a slow-moving big rig that will take all day to pass the even slower big rigs at the right. This happens in the form of foot traffic here in the city. Just as you swerve toward the open sidewalk to pass the slow-footed line of pedestrians the person directly in front of you decides to fill that opening and proceed to not walk any faster than the rest of the line of people, once again leaving you behind a wall that forces you into the street to pass.

Last, but not least, imagine yourself at the corner of an intersection waiting for the “walk” signal. You arrived to the corner first so naturally you should get a bit of a head start. But each new pedestrian arriving at the corner steps a little more in front of the last person to arrive, with each new arrival making her/his way to the front of the crowd waiting to cross...as if that person’s journey is more important than everyone else’s. This would be the least bit tolerable if upon the “walk” signal that person moves like s/he has a place to go, but too often the last person at the corner will rush to the front of the crowd only to walk across the intersection not nearly as fast as s/he pretended s/he would.

San Francisco is the second-most densely populated U.S. city behind only New York City. Combine that with the city’s reputation as a popular tourist destination, the result is many people in a small area. For comparison, San Francisco has less than half of the land area but nearly twice the population of Sacramento. What makes San Francisco such a great city is the seemingly endless things to do and see, which draws crowds. Unless you’re exploring one of the city’s hidden gems, crowds will be everywhere you go, whether it’s the train station, store, or Ferry Building. In fact, each visit I make to the Ferry Building I feel bad for those standing in long lines for the restroom, which is another reason I am lucky to live in the city since a toilet is a less-than-fifteen-minute walk home.

And I say with a smile that I dare you to take BART, Muni, or a bus during rush hour, but don’t be surprised if you wake up with a sore throat the following morning. 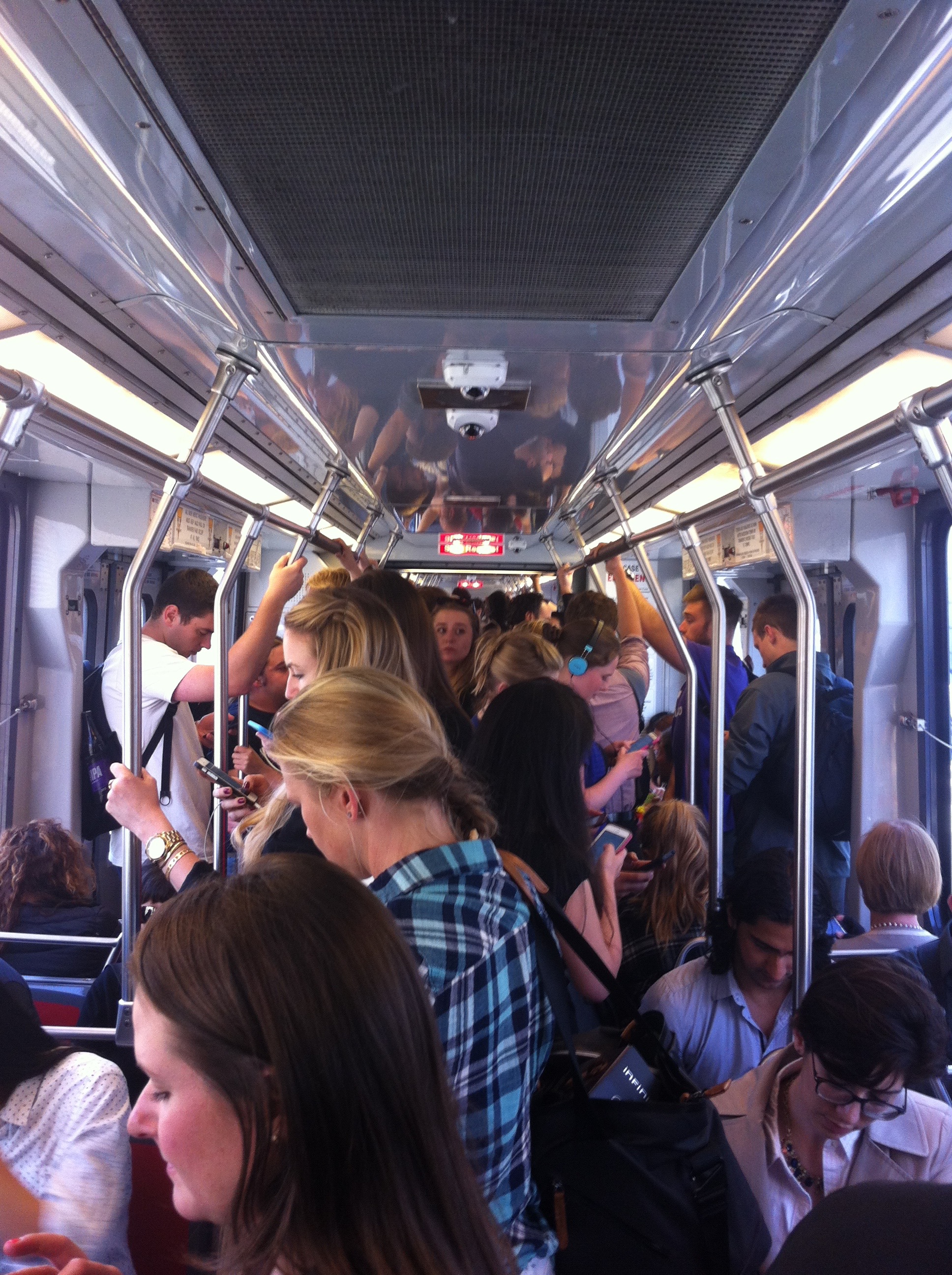 According to an article on Time, “San Francisco is the most unaffordable market in the U.S.” Gentrification is a major issue as six-figure techies continue to saturate the housing market and squeeze out long-time residents despite the seemingly endless construction of downtown residential high rises. Prepare to cough up well over two grand per month for one of the cheapest studios if you are lucky enough to be ready to jump on one that becomes available in your price range. But that’s not where the pain begins. When the place becomes available, prepare to join a large early crowd during open house (ah...those crowds again) and either be put into a raffle by the landlord or enter a bidding war. This of course is if you are lucky enough to not get waitlisted behind dozens of other qualified applicants. Yes, a city’s wild popularity has its drawbacks.

Others living in San Francisco may have more to add to this list or read this and call me a complainer to which I would smile. However, when this topic popped into my head I intended to make this a top-10 list, but could not come up with ten legitimate complaints I have about this city that are worth putting into the post nor could I come up with additional problems exceptionally unique to San Francisco that are not also common in many other major cities.