The Likely End of an Unremarkable Modeling Career

Several months after being laid off from my full-time design position I turned to a different industry. An industry in which I had more of a love-hate relationship, without most of the love of course. In November 2016 I submitted images to every respectable Bay Area modeling agency I discovered online. Most rejected me immediately, which is not unlike most non-modeling jobs I apply to. Two weeks went by. Then a month. By then I realized that the few, if any, remaining agencies who didn’t reject me had no intention of contacting me. Then to my surprise I receive the email below.

The only personal highlight in my emotionally turbulent month of January gave me hope that some modeling life remained.

Today I got rejected by that hope, and the entire experience felt like a trip to the doctor’s office. First, due to high volume I had to wait a month before they could see me. Second, the arrival instructions make it clear to not be late. So I arrived 15 minutes early, waited in their waiting room for those 15 minutes plus an additional 15 minutes after the scheduled appointment when they finally remembered I was sitting in there. An assistant walked me to an empty room and measured my height before doing anything else. After saying, "73...perfect," she handed me the script to a commercial and told me “the agents will be right with you” before bolting out of the room. Where have I experienced all of this before?

The agents came in, heard my dry monologue, asked me a few questions about myself, and then left the room. They returned to tell me they are too concerned about my lack of recent experience to accept me into an agency that generally represents models with more. My résumé had nothing on it from after 2012.

The rejection gives me the strange emotional juxtaposition between disappointment and relief. The disappointment comes from accepting the fact that I had no future in the industry only to get my hopes up for a month just to feel those hopes get shot down again in the flash of an afternoon. The relief comes from no longer having to worry about schedule conflicts that would likely force me to choose between having a design career and a modeling career. I also no longer need to experience anymore useless emotional roller coasters, especially for an industry I’m not particularly passionate about. I’m not sure if my lack of passion for modeling is more related to the shallow nature of the industry or simply my lack of passion for life in general, but that is for another blog.

Before the modeling days...

Long ago I worked as a cashier for one of those big box warehouse companies...you know, the one with the orange apron. An attractive co-worker occasionally flirted with me in her down time. I thought it was a fluke. One day a customer comes in and says, “you shouldn’t be working in the lumber department, you should be a model.” The very next day, a different customer comes in and says the exact same thing almost word for word. I began to wonder if the world was trying to tell me something.

I will spare you the 100-page autobiography by giving you the memories that stick out in my mind. 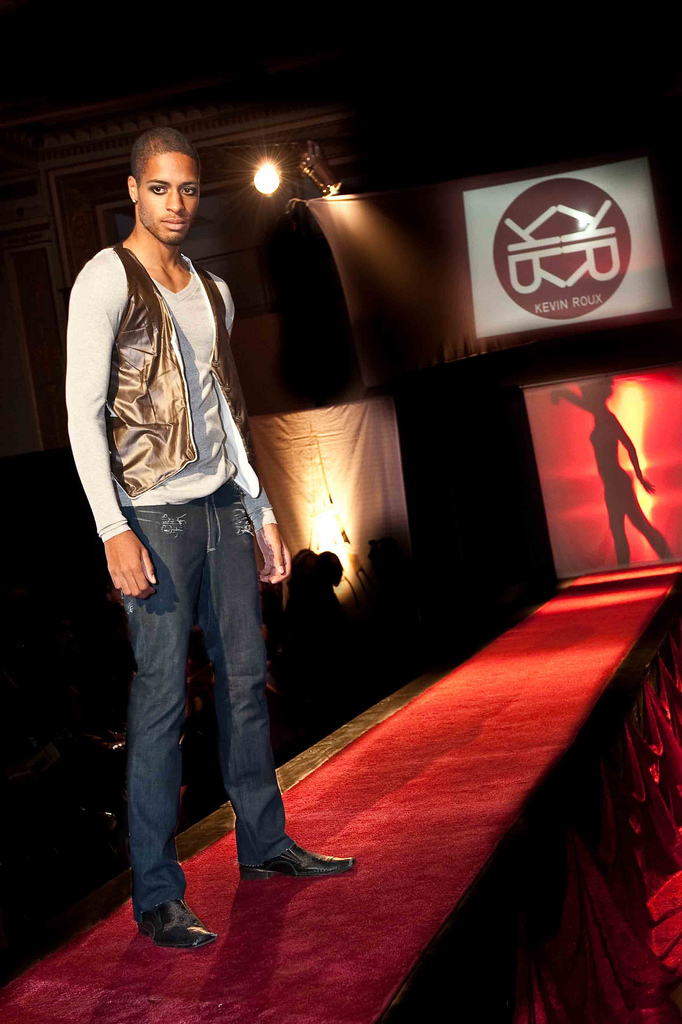 Yes, I am wearing both guyliner and hair in the image above, which is from the first fashion show I walked in. The show was called “One Night in Paris.” If that name sounds familiar, it’s the title to something even more famous. I dare you to look it up.

I walked in another fashion show less than a month later. There I realized I never wanted to be a runway model. I must have hated myself because I walked in four more shows over the next several months before finally giving it up.

My first paid gig was promotional. It required me to stand outside for five hours, resulting in a sunburn despite the 55-degree weather. The top of my head and nose were peeling for a week. Imagine if I had to be out there for the entire eight hours originally scheduled for me.

I never got paid for my participation in the image above. The person who was supposed to pay me added me on LinkedIn years later as if nothing ever happened. The pay was low enough for me not to care about the money by that point. However, at the time of the shoot I was not represented by an agency but I recognized many models at the shoot who were. I'm almost 100% convinced that they not only got paid but likely received about ten times whatever I was due. It pays to be represented.

At the beginning of my college years in Berkeley I modeled T-shirts for a San Francisco apparel company.

In another promotional gig I shared the stage with Amy Schumer at the 2011 MI6 Game Marketing Conference Awards. Amy's growth over the next few years makes me even more infuriated that no photo evidence of this event seems to exist.

Shortly after graduating from college and returning home to Sacramento, one of Northern California’s most reputable agencies signed me. In fact, they represented some of the models in the shoot I never got paid for. I naïvely considered this signing a big break. The agency dropped me a month later. Why? Being a recent college grad I couldn’t afford the required shoots and training to build my portfolio. I got a seasonal job and told the agents I could afford it soon, but they still dropped me after one month despite telling me on the day they signed me that their probation period is four months.

At the beginning of the following year I submitted images to a different agency. They were interested enough to contact me but requested more images before saying no. The reason? My waist was too small.

Four years later and here we are today. Coincidentally, the agency I visited today is the same agency from two sentences prior. Yes, I often get back up after getting knocked down. But sometimes, it's best to stay down.

Without going into too much detail, considering my modeling experience a metaphor for my life requires little stretch of the imagination. Beginnings of hope followed by an honest effort before realizing I am neither good enough nor passionate enough nor lucky enough to sustain success. If you expected anything more profound or philosophical, I apologize. I’m too mentally exhausted to think deeply right now.

Modeling did produce my most liked Instagram photo, so there’s that.